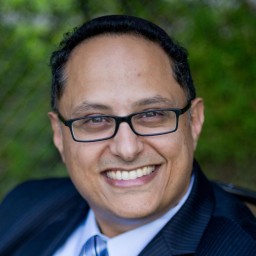 This article by Jim Parker, vice president for Dimensional Fund Advisors, was featured in his “Outside the Flags” column on August 17. From his office in Australia, Jim provides his perspective on issues occupying investors’ minds and on those beyond their immediate view.

When news breaks and markets move, content-starved media often invite talking heads to muse on the repercussions. Knowing the difference between this speculative opinion and actual facts can help investors stay disciplined during purported “crises.”

At the end of June this year, UK citizens voted in a referendum for the nation to withdraw from the European Union. The result, which defied the expectations of many, led to market volatility as participants weighed possible consequences.

Journalists responded by using the results to craft dramatic headlines and stories. The Washington Post said the vote had “escalated the risk of global recession, plunged financial markets into free fall, and tested the strength of safeguards since the last downturn seven years ago.”1

The Financial Times said “Brexit” had the makings of a global crisis. “[This] represents a wider threat to the global economy and the broader international political system,” the paper said. “The consequences will be felt across the world.”2

It is true there have been political repercussions from the Brexit vote. Theresa May replaced David Cameron as Britain’s prime minister and overhauled the cabinet. There are debates in Europe about how the withdrawal will be managed and the possible consequences for other EU members.

But within a few weeks of the UK vote, Britain’s top share index, the FTSE 100, hit 11-month highs. By mid-July, the US S&P 500 and Dow Jones Industrial Average had risen to record highs. Shares in Europe and Asia also strengthened after dipping initially following the vote.

Yes, the Brexit vote did lead to initial volatility in markets, but this has not been exceptional or out of the ordinary. One widely viewed barometer is the Chicago Board Options Exchange Volatility Index (VIX). Using S&P 500 stock index options, this index measures market expectations of near-term volatility. 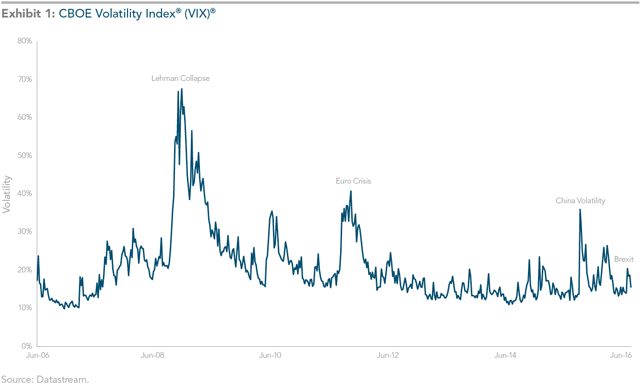 You can see by the chart above that while there was a slight rise in volatility around the Brexit result, it was insignificant relative to other major events of recent years, including the collapse of Lehman Brothers, the eurozone crisis of 2011, and the severe volatility in the Chinese domestic equity market in 2015.

None of this is intended to downplay the political and economic difficulties of Britain leaving the European Union, but it does illustrate the dangers of trying to second-guess markets and base an investment strategy on speculation.

Now the focus of speculation has turned to how markets might respond to the US presidential election. CNBC recently reported that surveys from Wall Street investment firms showed “growing concern” over how the race might play out.3

Given the examples above, would you be willing to make investment decisions based on this sort of speculation, particularly when it comes from the same people who pronounced on Brexit? And remember, not only must you correctly forecast the outcome of the vote, you have to correctly guess how the market will react.

What we do know is that markets incorporate news instantaneously and that your best protection against volatility is to diversify both across and within asset classes, while remaining focused on your long-term investment goals.

The danger of investing based on recent events is that the situation can change by the time you act. A “crisis” can morph into something far less dramatic, and you end up responding to news that is already in the price.

Journalism is often described as writing history on the run. Don’t get caught investing the same way.

Jim Parker is a vice president for DFA Australia Limited, a subsidiary of Dimensional Fund Advisors. He serves as head of Dimensional’s communications and marketing team in Australia. Jim joined Dimensional in 2006 after 25 years working as a journalist in newspapers, television, radio, and online media. His specialty was financial journalism, particularly in relation to economics and financial markets. Jim holds a bachelor of arts in social and economic history from Deakin University and a journalism certificate from Auckland Technical Institute.